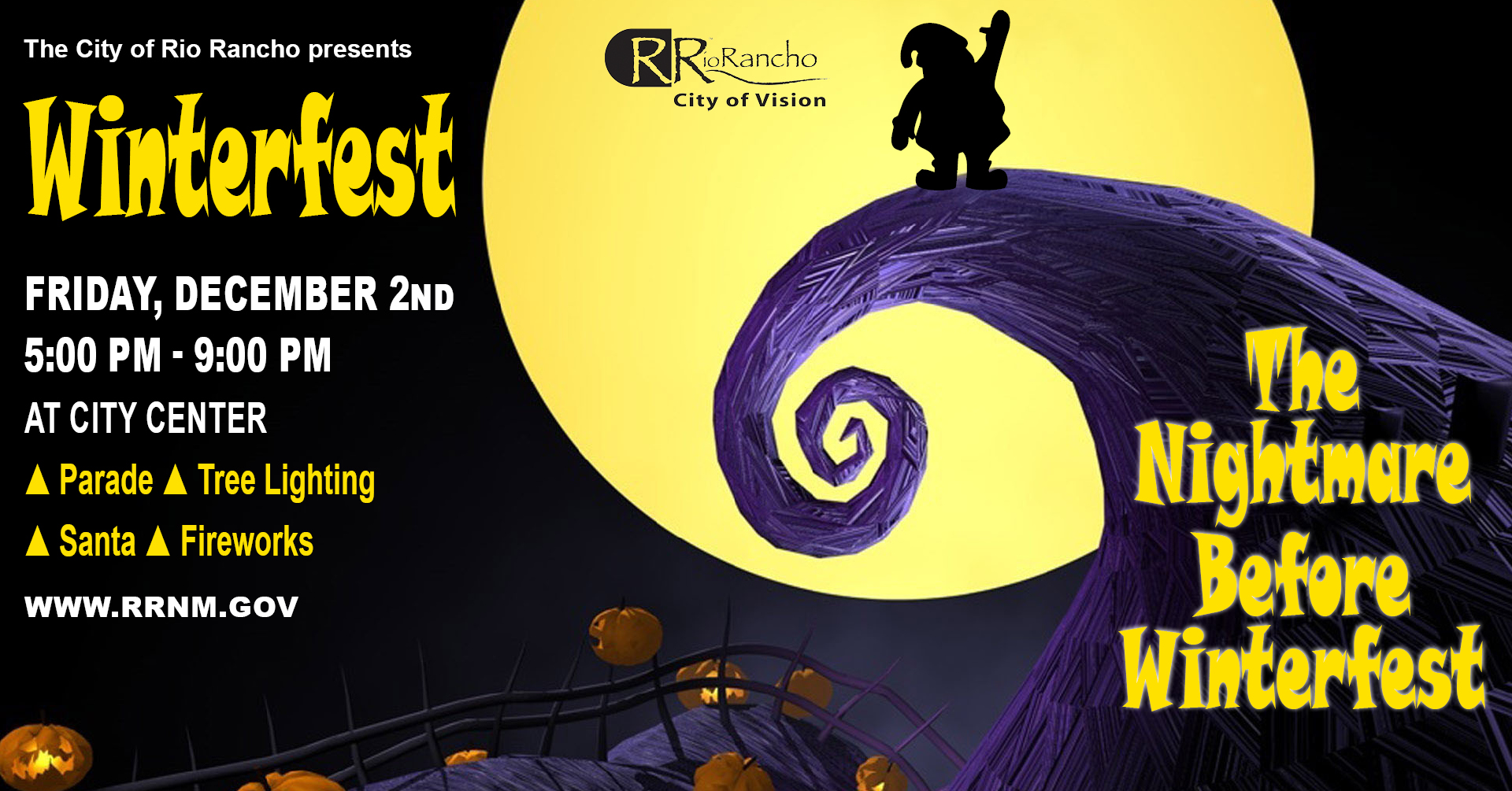 Winterfest returns to the new Campus Park @ City Center on Friday, December 2. Starting with a parade and ending with a tree-lighting there will be plenty to do in between for the entire family. Come and take photos with Santa to start the night and watch fireworks to end the night and enjoy a cup of free hot chocolate in the middle of it all. The parade will begin at 6 p.m. and the tree-lighting will take place at 7:30 p.m.

**Schedule is subject to change. 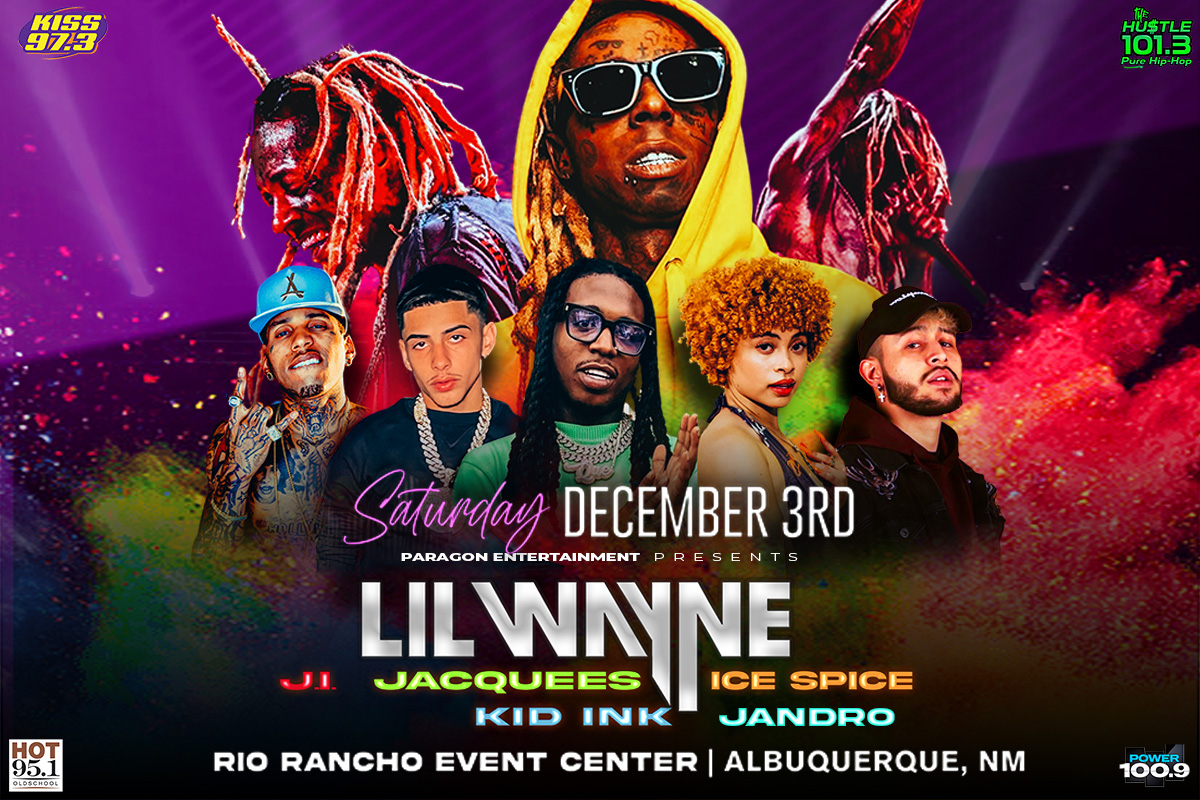 AT THE RIO RANCHO EVENTS CENTER ON SATURDAY, DECEMBER 3, 2022

Beginning on Wednesday, September 21 at 10 a.m. MST through Thursday, September 22 at 11:59 p.m. MST, tickets will go on presale for a limited amount of time. Fans may register for presale ticket access at www.RioRanchoEventsCenter.com or listen to 100.9 FM BEAT and HUSTLE 101.3 FM for discount codes. Tickets for this special performance will go on sale to the general public on Friday, September 23 at 10 a.m. MST.  Ticket purchases will be available at  www.ticketmaster.com and the Rio Rancho Events Center Box Office (3001 Civic Center Cir NE, Rio Rancho, NM 87144) presented by Chalmers Ford.  Box office hours are Monday – Friday from 10 a.m. – 4 p.m.

Lil Wayne is an American rapper, singer, songwriter and record executive. He is commonly regarded as one of the most influential hip hop artists of his generation, and often cited as one of the greatest rappers of all time.  His career began in 1995, at the age of 12, when he was signed by rapper Birdman, joining Cash Money Records as the youngest member of the label.  Lil Wayne has sold over 120 million records worldwide, including more than 20 million albums and 70 million digital tracks in the United States, making him one of the world’s best-selling music artists.  He has won five Grammy Awards, 11 BET Awards, four Billboard Music Awards, two MTV Video Music Awards and eight NAACP Image Awards.  On November 27, 2020, Lil Wayne released the mixtape No Ceilings 3, while announcing the album I Am Not a Human Being III for 2021, although it would not be released that year due to delays. On October 1, 2021, Wayne and Rich the Kid released a collaborative mixtape titled Trust Fund Babies, along with a music video for the single “Feelin’ Like Tunechi”.  Wayne is currently working on Tha Carter VI.

A singer, songwriter, and rapper who crossed over from R&B to hip-hop, Rodriquez Jacquees Broadnax is known simply as Jacquees when he steps out from behind the scenes. His smooth, sensuous songs sound contemporary while staying true to the artist’s formative influences, and their main purpose is to make his listeners feel good. Jacquees has collaborated with numerous notable singers and rappers, including Chris Brown, Young Thug, Trey Songz, and others.

Kid Ink is an American rapper, singer, songwriter, and record producer from Los Angeles. He released his debut independent album Up & Away in 2012, following an EP titled Almost Home, and his first major studio album My Own Lane in 2014.  On February 3, 2015, he released his third studio album Full Speed. In December 2015, Kid Ink released a surprise commercial mixtape Summer in the Winter with the supporting single “Promise” (featuring Fetty Wap). In 2016, he released the mixtape RSS2 and the EP 7 Series with the lead single “F with U” (featuring Ty Dolla Sign) in 2017. In December 2018, he released the EP Missed Calls supported by the single “YUSO” (featuring Lil Wayne and Saweetie). In 2021, he released his first independent album in 9 years, Alive on April 9.

J.I the Prince of N.Y or more recently simply J.I., is an American rapper, singer, and songwriter. He is best known for his 2019 breakout single “Need Me”, which has over 100 million streams on Spotify.

Ice Spice is an American rapper who rose to fame after her response to Erica Banks’ “Buss It” challenge went viral in 2021. Her first single, “Bully,” dropped shortly thereafter. She went on to score a hit with her 2022 single “Munch (Feelin’ U).” 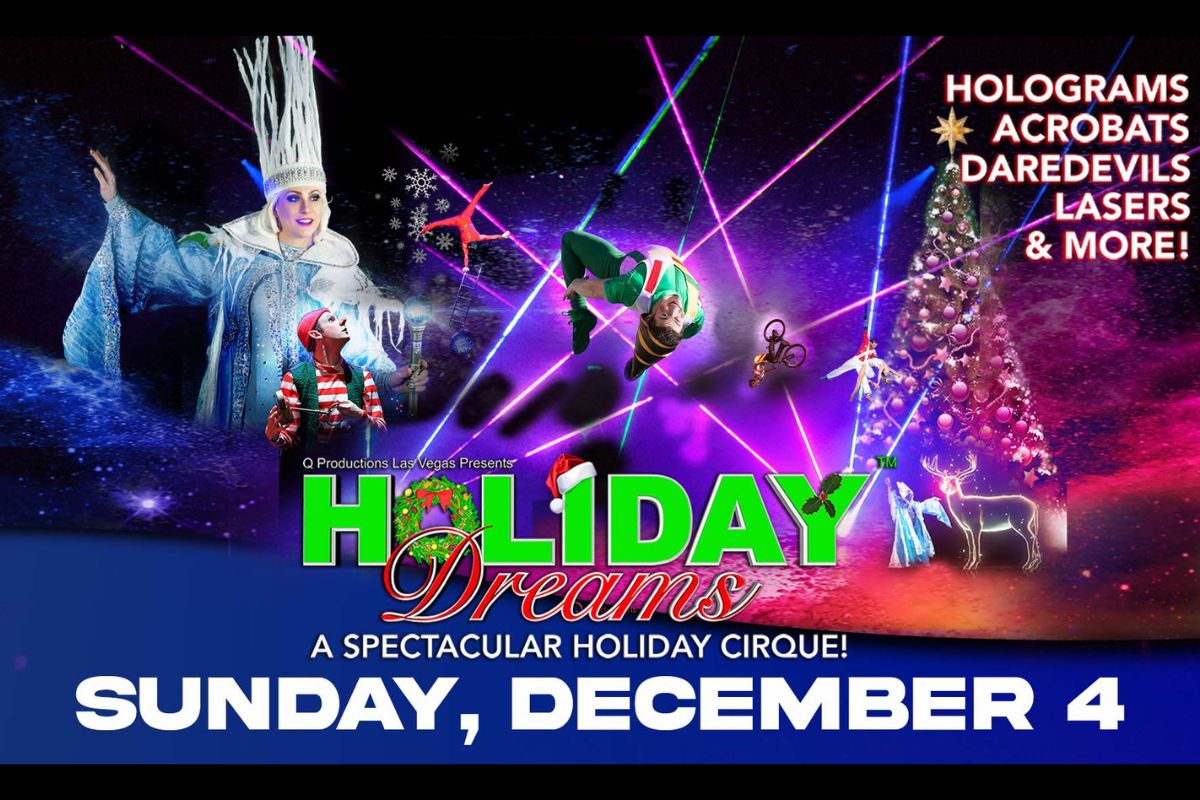 Looking for something new and exciting to do this holiday season?  Look no further than Holiday Dreams, A Spectacular Holiday Show!  This amazing holiday show is coming to Rio Rancho Events Center on Sunday, December 4th at 3pm and features holograms, projection mapping, holiday music and incredible lasers, along with a cast of award-winning acrobats, daredevils and cirque-performers.

Created as a modern alternative to holiday shows, Holiday Dreams presents a fast-paced exciting cirque-style show that is appealing to everyone. Produced by Las Vegas-based production company, Q Productions Las Vegas, the show presents holographic technologies as seen only in Vegas productions. The show also features projection mapping and interactive lasers. The performers range from  award-winning acrobats to seasoned talent seen in shows like America’s Got Talent and Outrageous Acts of Science. Added spectacles such as elves catapulting themselves off of ramps while riding scooters to BMX Bikes and Extreme Rollerbladers to acrobats diving off a giant Trampwall and all the way to comedic performances, Holiday Dreams delivers a totally unique spectacle.

Show creator and producer Fernando Quevedo says “I wanted the show to present high-end technology and amazing talent seen only in Vegas shows. We have holograms that are truly magical. We have Lady Light, an award-winning laser performer that ‘bends’ light and manipulates lasers; we have a lot of audience interaction and comedy.” says Fernando. He adds, “I also wanted to create a show that celebrated the spirit of the Holidays and would serve as a bridge for families from different generations to come together and experience something together. We are all absorbed in our little technological worlds. Theater allows a communal experience. A place for all to gather and laugh, cheer and be awed. There’s something truly wonderful about that.”

Holiday Dreams is not only high-energy production numbers. It has a whimsical story that connects all of the performers featuring a mischievous Elf that thinks he has mailed himself to a tropical island but instead finds himself delivered to the wrong address: The Rio Rancho Events Center.

So if you’re looking for something new, fun, exciting and holiday-themed to do this holiday season, be sure to check out Holiday Dreams, A Spectacular Holiday Show! 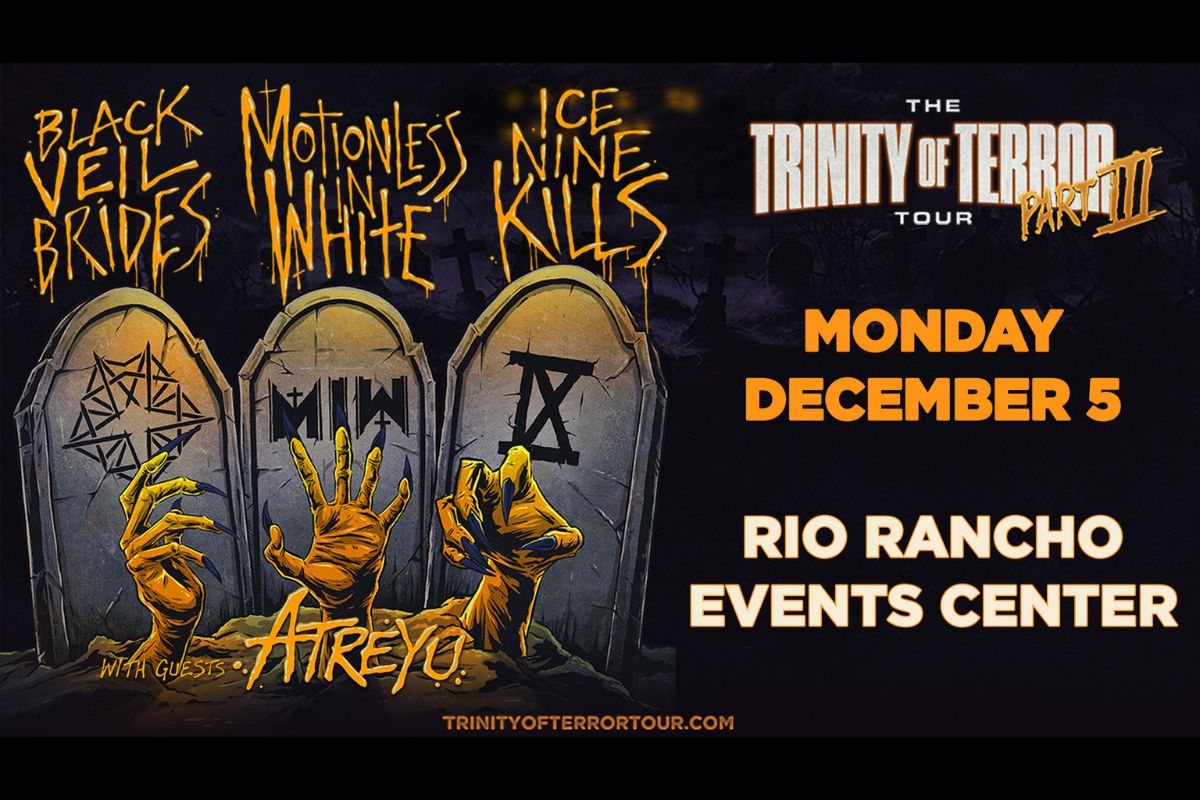 Ice Nine Kills, Black Veil Brides and Motionless in White have announced that they will expand the massively popular tour with a third leg this coming fall. Thanks to the reception of fans, the bands are happy to announce a third leg of North American dates that will extend the Trinity of Terror tour through December.  Three of the biggest names in modern hard rock once again bring their incendiary live shows to the same stage each night along with special guests Atreyu. 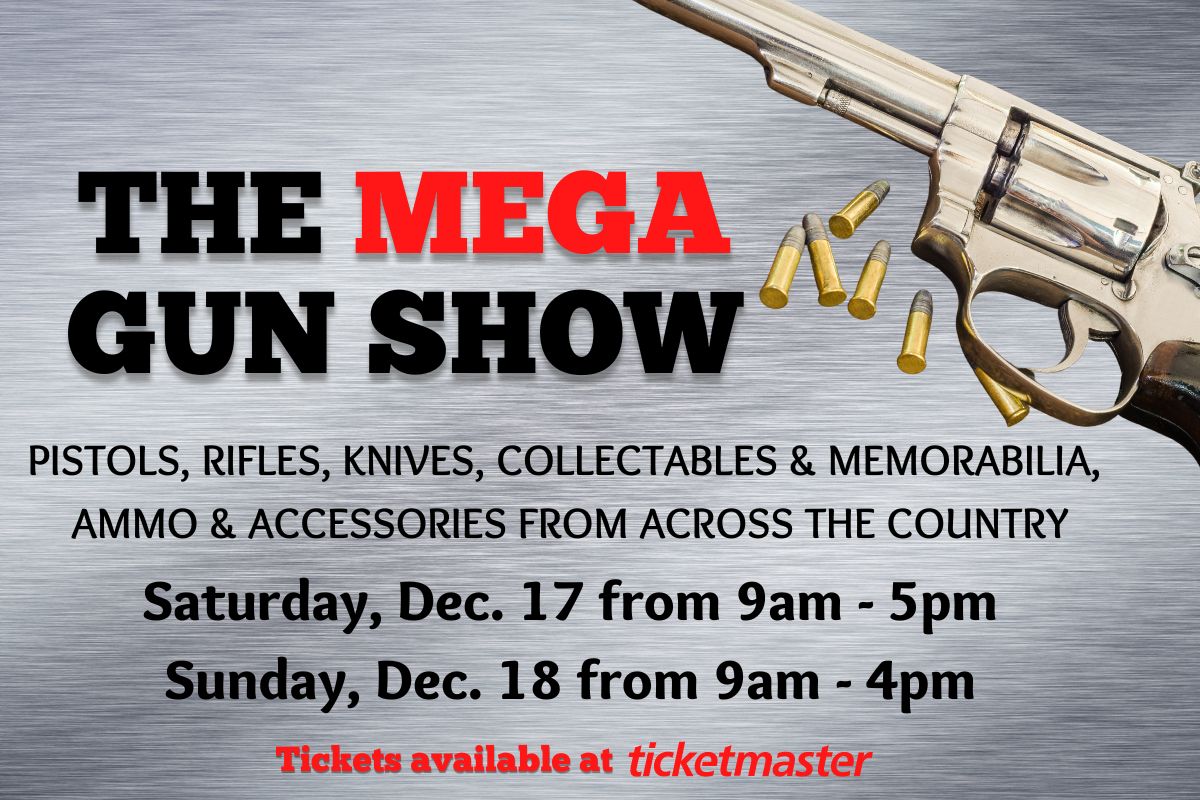 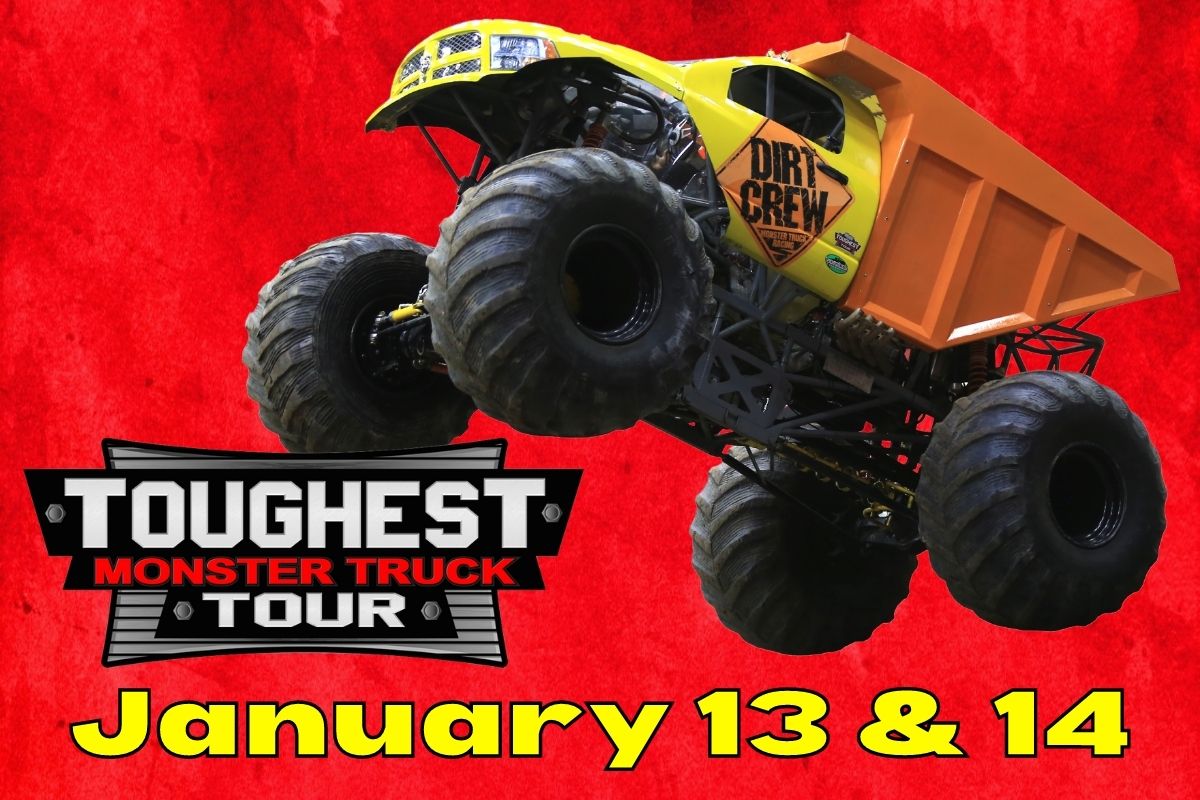 January 13 & 14, 2023 the Toughest Monster Truck Tour will return to Rio
Rancho Events Center. Tickets go on sale to the public this Friday, July 22. ALL adult tickets are $5 off and
ALL adult and child tickets include a FREE Pit Pass (a $10 value) through August 1. Fans don’t have to wait
though. The offer above is available during the Pre-Sale starting at 10am this Wednesday, July 20 through
Thursday, July 21 with the code RREC23. Starting July 22, the same offer will be available with no code
required through August 1.

“This year’s event will include the debut of a brand-new truck, never seen before in Rio Rancho,” said Kelly Hess
Goldman, the event promoter. “As our fans know, the Toughest Monster Truck Tour event features larger
obstacles that can normally be seen at other indoor events in the area in the form of oversized dirt jumps with
old-school crush cars incorporated into the all-dirt track,” she added. “Plus, kids tickets start at $15, regardless of
when you buy.”

In addition to the monster trucks, the high-flying tricks and stunts of the daredevil Freestyle Motocross team will
also be featured.

To celebrate the return of monster trucks to Rio Rancho Events Center, select Toughest Monster Truck Tour
tickets will be $5 OFF and ALL tickets purchased will come with a FREE pit pass, regardless of price level
during the Pre-Sale THIS Wednesday through Thursday with the code RREC23 and during the Early Bird Offer from
July 22-August 1 with no special code needed.

The Pit Pass gets fans in early to walk on the dirt track, see the trucks up close, get autographs from the drivers
and take photos. After August 1, pit passes can be purchased for $10.

GROUP DISCOUNTS AVAILABLE FOR GROUPS OF 10 OR MORE – $5.00 OFF PER ADULT TICKET – CLICK HERE FOR MORE INFORMATION